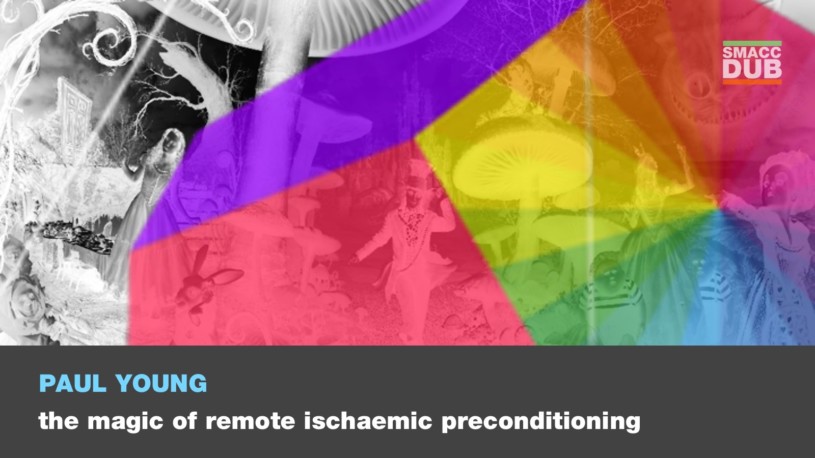 Paul takes us through the basics of Remote Ischaemic Conditioning.

Firstly, he explains that the idea is simple enough. That is, blockage to one site leading to ischaemia, preconditions another site to subsequent ischaemia.

Evidently, this was first demonstrated by blocking the circumflex artery in the first instance with a series of temporary occlusions. As a result, the left anterior descending was then blocked for a prolonged period. Evidently, this preconditioned the heart to the prolonged ischaemia and decreased deleterious effects.

Furthermore, this effect was then repeated with transient renal ischaemia protecting the heart from prolonged cardiac ischaemia. This effect was demonstrated with different organs – with almost any organ being able to protect another organ.

The clinical application? Inflate a blood pressure cuff on an arm (to above systolic blood pressure) for five minutes and you will protect the opposite limb… or the heart. Remote ischaemic preconditioning is a reproducible phenomenon. However, as Paul explains, no one knows how it works.

In this talk, Paul describes his research – a double blind trial on remote ischaemic preconditioning; the first of its kind. Also, he describes a systematic review and meta-analysis he conducted. He found conflicting results in his trial and heterogeneity across other studies. When considering further research Paul concluded that nothing was convincing and there were many pitfalls in the papers.

What matters? What the patient can do, how they feel, whether they live and to a lesser extent, does the intervention save money? Ultimately, it seems that it is the relationship between ischaemia and reperfusion that makes a difference, that is, apply the remote ischaemic preconditioning after the primary ischaemia but before the reperfusion.

Evidently, this has potential clinical implications for:

Tune in to Remote Ischaemic Conditioning and Critical Care by Paul Young.

For more, head to our podcast page. #CodaPodcast

Paul Young is a member of the Australian and New Zealand Intensive Care Society Clinical Trials Group (ANZICS CTG). His primary interest is in the design and conduct of large-scale multicentre clinical trials in the field of Intensive Care Medicine.He is the co-clinical leader and director of research at Wellington ICU, the clinical director at Wakefield Hospital ICU, and the ICU programme director at the Medical Research Institute of New Zealand.