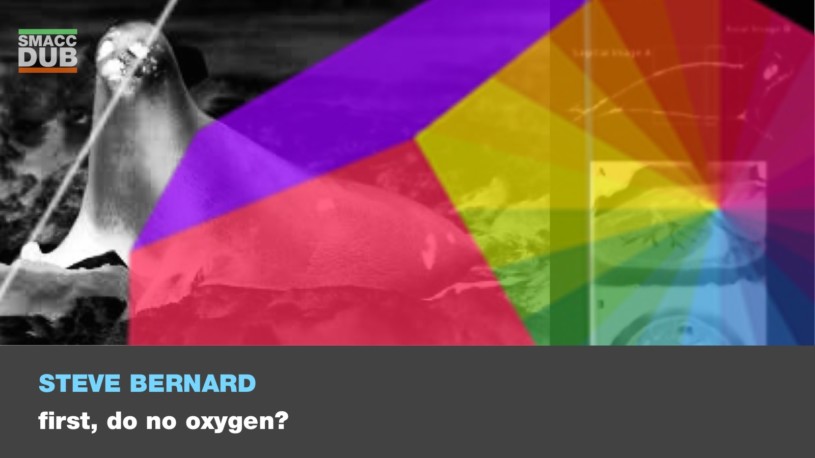 First, do no oxygen from Royal North Shore Hospital & UTS

Stephen Bernard shares his thoughts and the current evidence for using oxygen for cardiac arrest patients.

Oxygen is ubiquitous in society! You can buy it in bottles and there are even oxygen cafes.

This is especially true in hospitals where oxygen is used frequently and often without much thought.

Oxygen is a natural substance. So surely, a short time on 100% oxygen can’t be harmful, right? Stephen wants to challenge that idea.

In this talk he presents the data on why oxygen might be harmful to your patients, particularly following a cardiac arrest.

Out-of-hospital cardiac arrest (OHCA) is common and carries a high mortality rate. In Victoria, Australia, approximately 50% of patients with an initial cardiac rhythm of VF achieve a return of spontaneous circulation (ROSC) and 30% overall survive to hospital discharge.

The outcome for patients is improving. This is due mainly to faster ambulance response times and increased rates of bystander CPR. What is done in the hospital has altered the patient’s outcomes in the same way.

Currently, OHCA patients who have achieved ROSC but who remain unconscious routinely receive 100% oxygen for several hours in the ambulance, ED, cardiac catheterisation laboratory until admission to ICU. However, there is now evidence from laboratory studies and preliminary observational clinical studies that the administration of 100% oxygen during the first few hours following resuscitation may increase both cardiac and neurological injury.

Clinical trials are underway to test whether titrated oxygen to a target oxygen saturation of 90-94% in the immediate hours after ROSC results in improved outcomes compared with 100% oxygen.

Join Stephen as he makes you think twice about blindly using oxygen for patients following a cardiac arrest.